We the (fallen) people 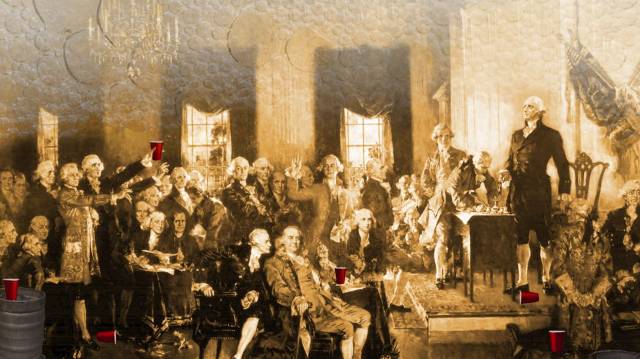 The landmark new book, We the Fallen People: The Founders and the Future of American Democracy by Robert Tracy McKenzie, PhD, Vanderbilt University, and Arthur F. Holmes, Chair of Faith and Learning and professor of history at Wheaton College, brings out the most important “Christian” thing about the Founding Fathers of America. Not that they were Christians (there is a lot of discussion about this with no real conclusion), but that one very important biblical doctrine greatly influenced their thinking, regardless, when it came to the founding of this country. And that would be the doctrine of original sin.

The Founding Fathers did not believe that human beings were basically good and that, believing the best about them, a majority of human beings would always make the right choice for the common good. No, they knew that most of them would make the best choice for their own good, because we are predominantly selfish people. And when questioned as to the basis for this conclusion, one of them said truthfully, “By knowing my own heart.” Or as Alexander Solzhenitsyn has written, “the line separating good and evil passes through every human heart.”

Why is this important? Because we need it to properly understand both ourselves and the world around us. When you see your own selfishness, prejudice and unjust behaviors, you begin to appreciate why the Founding Fathers set up a government that shared power between branches of government, between parties, with limited terms of office and the provision to police each other in government. These are all checks and balances against the worst in human nature. And where we are headed right now with only one party 100% right (in everyone’s thinking — mine, of course, not yours), and a president pushing the limits of power on every front — everyone else be damned — is a place the Fathers would abhor.

As Christians we must start with ourselves. We are sinful, fallen people. We need not judge anyone else to understand this; just look at our own hearts. And having done that, then we need to reach across the table, across the aisle, across the news channels, across the bridge, and realize fighting, belittling, tweeting anger and sarcasm about others on the other side will not get us anywhere, because we are all not wholly reliable to do the right thing. We may not be wholly evil, but we are, none of us, reliably good.

You and I as Christians have a basis from which to do this because we have been saved from our sin, not by ourselves or because of ourselves, but by the grace of God, and we can turn that grace outward to everyone, everywhere. This kind of living will be countercultural. It will stand out. It will be revolutionary.

The Founding Fathers believed that if we found a way to work together humbly in our differences, we would also be guarding against the worst in all of us. That is the kind of thinking that made America great in the first place, and it’s something you and I can recover; maybe not for the country, but certainly for our own relationships. And I am convinced that living like this will give us opportunity to share the gospel.

Robert Tracy McKenzie will be our guest on BlogTalkRadio, Tuesday, August 3. And don’t miss our interview tonight with Kristin Kobes Du Mez, author of Jesus and John Wayne: How White Evangelicals Corrupted a Faith and Fractured a Nation.

This entry was posted in politics and tagged grace turned outward, politics. Bookmark the permalink.

11 Responses to We the (fallen) people