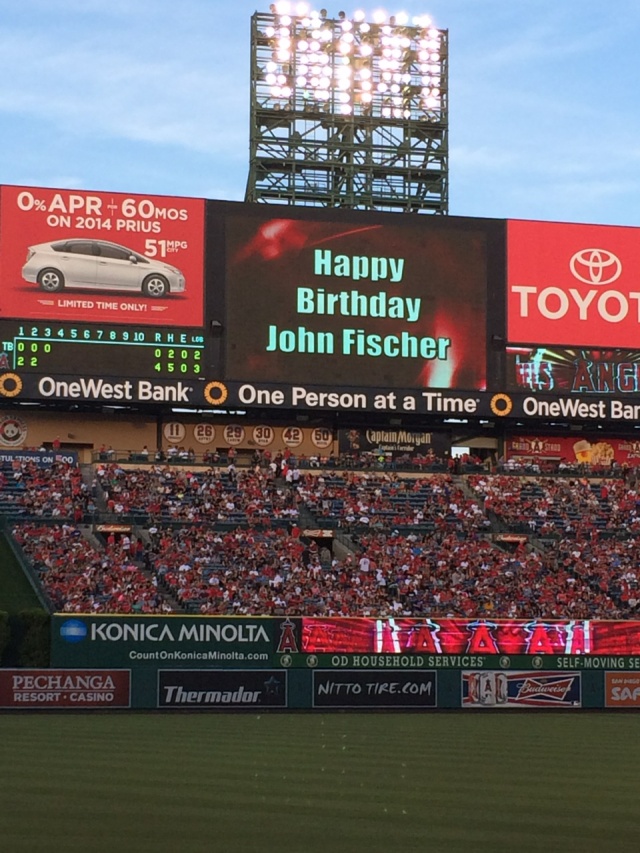 Well now, I know that you are sick of my birthday, but the problem is, I’m not. And since I still have one more gift to open up you’re all going to have to suck it up for one more celebration. You see, one of my birthday gifts was two tickets to an Angels v. Twins doubleheader that starts in about two hours. So I’m opening that one right now. Chandler is going to attend the first game with me and Uber home, while Christopher joins me for the second. So I get to take in a doubleheader with my boys. Happy Birthday!

In honor of that, I’m posting this picture from a few years ago. I think I’ve had the biggest birthday wish on the Jumbotron of anyone as far as I can tell. Of course knowing John Carpino, President of the Angels, didn’t hurt. Our boys were both in the same Indian Guides program years ago, so we’ve had a few adventures together including sailing through 18-foot swells between Newport Beach and Catalina coming back from a weekend camp there. I thought we’d never make it. Whoever thought 26 miles could be so daunting.

Marti made up a special gift card to announce this game to me, and I must include it here because it is so clever.

The’ve decided to hand things over; they’re making a big deal about it, too — an armada of press, influencers with a gazillion followers, and the Times is doing a piece (for old time’s sake). You’ve earned this with more than a few good ideas that improved the bottom line. The board is in agreement. Now the Birthday is all that’s left.

They’ve spared no expense with the venue and the guest list. After all, this is about making an impression. Confidence in front of the camera is key. Remember to smile (you’ve got a good one). Your speech is perfect; follow it.

But is all that enough? You didn’t get this far by being timid or by blending in.