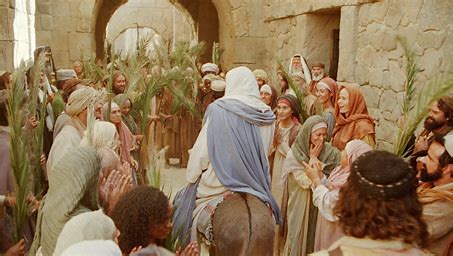 When Jesus made His triumphal entry into the city of Jerusalem on a donkey’s colt (that was a far cry from what the Jews were expecting in their Messiah, even though Zechariah 9:9 had prophesied it 500 years earlier), and the people and the disciples were proclaiming the mighty acts of God through the many miracles and healings He had performed over the last two and a half years, the Jewish leaders and Pharisees demanded that Jesus stop them, to which Jesus replied, “I tell you, if they keep quiet, the stones will cry out” (Luke 19:40). Meaning, that if we don’t proclaim the mighty works of God through Jesus Christ, the stones will, and though hearing the stones cry out would be a very remarkable thing, they would not do a very adequate job of conveying a message, because stones don’t talk very well.

It remains to be true today that whenever the message is not presented clearly in the culture, or is absent altogether, the stones will take it up and distort it. It creates confusion, which is where we are today.

The gospel of Christ has become garbled in recent years because Christians haven’t been clearly proclaiming Jesus as Lord — they have gotten sidetracked into peripheral issues — so they have left it to the stones to cry out, and as expected, the stones are distorting the message. Therefore that leaves it to you and me to step up and clarify the message and cut through the clutter for the people and the culture in which we live. This is imperative. We have a big task to perform — to take back what was given to us from the first church until today, to re-establish the gospel and to proclaim the lordship of Jesus Christ over all. That’s why we are beginning, this week, a Rock Solid Campaign — to present the Rock Solid truth of Jesus Christ through our voice on the internet, and through our individual boots on the ground in the 143 countries we serve.

To do this we will be rallying all our forces as an online church to activate everyone’s spiritual gifts and the power and encouragement to use them. And when we say that’s Rock Solid, we’re saying it is based on the word of God and the willingness of everyone in our body to take seriously Christ’s call to action. The Catch Ministry is an activated force for good in the world and an agent of change through the power of the Holy Spirit. If the world ever needed a clear voice, it is now. Time to silence the stones!

And to lead the charge today is a story from Marti about a courageous woman in the Old Testament who was in the right place at the right time, and because she was ready to act, she did, and her actions are still having an effect today. May the Holy Spirit find us all ready with the same eagerness to serve the cause of Christ.

Dorothy Sayers is one of my favorite writers who never found Christianity or life itself, dull. She once wrote, “Perhaps it is no wonder that the women were first at the cradle and last at the cross. They had never known a man like this Man — there never has been such another.”

This Man, we women know, loves us, respects us, and considers each of us His ongoing creation. He did not create all of us women to do the same thing.

Rather, He created each one of us to do a special thing in the world, and then set us to toil in whatever each of us does, leaving us to discover, in our task, what it is that distinguishes us.

Whatever “it” is, we know it is unmistakable, for it has been willed and empowered by the Man himself for He is “able to do immeasurably more than all we ask or imagine, according to His power that is at work within us” (Ephesians 3:20). Whatever it is, let it be illuminated by the power of our specific calling.

To demonstrate my point, I want to tell about a woman and the special thing she discovered that she was created to do. To tell my story, we need to go back a century or so after the Hebrews entered Canaan (the Promised Land). There is a commander of King Jabin’s Canaanite army, Sisera. Sisera with his is spending his days — 20 years altogether — oppressing the Israelites.

There also is a wise and courageous ruler or Judge of the Israelites named Deborah. The only woman among the twelve judges, Deborah followed God faithfully, acting with integrity in her duties. Her boldness came from relying on God, not herself. In a male dominated culture, Deborah did not let her power go to her head, but exercised authority as God guided her.

But my story is not about Deborah.

Deborah prevailed upon Barak, her military general and a heroic leader, to unite the tribes of Israel for greater strength, and because God had gone before him, he defeated Sisera’s Canaanite army at Mount Tabor.

But my story is not about Barak. My story is about Jael.

“The troops of Sisera fell by the sword and not a man was left” — except Sisera, who deserted his army and ran to the camp of Heber the Kenite, near Kedesh. Heber and King Jabin were allies. As Sisera staggered in, Heber’s wife, Jael, welcomed him into her tent (Judges 4:16-17).

The exhausted Sisera asked for water, but instead, Jael gave him curdled milk, a drink that would make him drowsy, and hides him under a blanket where the thoroughly frightened and exhausted man drops off to sleep — a sleep from which he never awakens.

The writer tells what happens next with elaborate detail: Jael takes a tent peg and the mallet with which the pegs were driven into the ground and hammers the stake through Sisera’s head! In a while, Barak arrives. Jael takes him into the tent and shows him the gory sight. In silence, Barak turns and walks away. (The honor of the victory is not his to claim for as Deborah previously predicted, the Lord delivered Sisera into a woman’s hands (Judges 4:9).

in a bowl fit for nobles she brought him curdled milk.

“Most blessed of women be Jael,” Deborah and Barak sang of her, and what did Jael do to merit such praise? Simple. She did what lay before her — the thing she was created to do.

Jael’s hammer was a hammer of justice. From that day on, the hand of the Israelites grew stronger and stronger against Jabin, the Canaanite king, until they destroyed him. Her heroic act was the beginning of the end of Canaanite control. Thus Israel, the repository of the “seed” through which Christ was born, was spared to that end, that she might play her part in bringing salvation to the world. “And I will put enmity between you and the woman, and between your seed and hers; he will crush your head, and you will strike his heel” (Genesis 3:15).

My point in telling this story is this: We never know what heroism lies in quiet obedience to God within our ordinary lives, and there’s no biblical reason why you, in your obedience, should not play an extraordinary role in the unfolding drama of world redemption.

We women will never know a man like this Man, Jesus Christ, because there never has been nor ever will be such another. He created each one of us to do a special thing in the world. He has set us to toil. Our task is to discover what it is that distinguishes each of us. Whatever it is, it is unmistakable, for it has been willed and created by God. Whatever it is — Go! — with all the force of the Spirit (and all your anxiety) for the needs of the world are immense. Do not copy others but trust that God is “able to do immeasurably more than all we ask or imagine, according to his power that is at work within us…” (Ephesians 3:20)

Believe this and there will never a dull moment in your life again.

The Song of Deborah (Entire Context)

when the people willingly offer themselves—

when you marched from the land of Edom,
the earth shook, the heavens poured,

the clouds poured down water.

when war came to the city gates,
but not a shield or spear was seen
among forty-thousand in Israel.

Then the people of the Lord
went down to the city gates.

Wake up, wake up, break out in song!
Arise, Barak!

so did Naphtali on the terraced fields.

in a bowl fit for nobles she brought him curdled milk.

indeed, she keeps saying to herself,

Then the land had peace for forty years.

This entry was posted in church, the gospel, women and tagged church, discipleship, spiritual gifts. Bookmark the permalink.

2 Responses to Silencing the stones