Are we living in a ghost town? 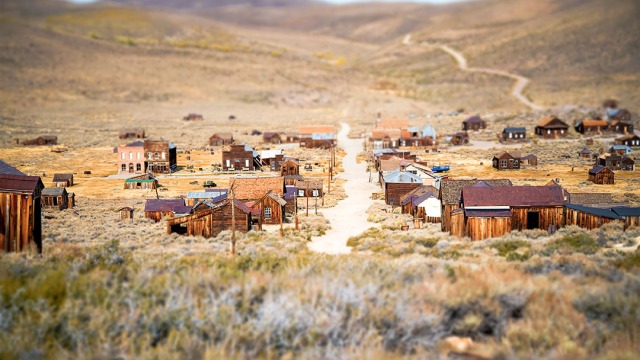 When it comes to road trips, I like to make plans. I love maps — the kind you get at gas stations that you can unfold and spread out in front of you where you can see the whole state and its major highways at once instead of trying to figure out where you are on the small screen of a cell phone. And if you’re traveling through two or three states in one day, it’s hard to beat a big map like one of the Western United States — everything from Texas, Oklahoma, Kansas, Nebraska, and North and South Dakota, west. That was our territory on this trip. We passed through California, Nevada, Oregon, Idaho, Utah, and a piece of Arizona.

But then again, I also like not having any plans, so that you can take advantage of what you find along the way. That’s when it’s nice to be on a road trip when you have time to explore. That’s what it was like with Chandler this last week and a half. We had no plan except to make it to Boise, Idaho, at some point in our trip for an important visit with Anne Marie Ritchie who had graciously agreed to bless Chandler as the godmother of our children. While Ron went to be with the Lord on July 3 of this year, “RonAnneMarie” — as they both liked to sign their names — was waiting to give Chandler their blessing.

So when we passed a sign on our second day on State Hwy 167 in California (we try to avoid interstates as much as possible) just before the border into Nevada that read, Bodie State Historic Park and Ghost Town, we looked at each other as said, “Let’s go!”

That’s when I was so glad I had decided to rent a truck for this trip instead of my car. There was a warning printed below the sign to Bodie that said it was going to be 10 miles of very rough road and we should allow at least 30 minutes to drive it. I’m sure that road would have shaken something loose off of my car.

The town of Bodie gives you an eerie feeling. You are in the middle of nowhere — a hilly country covered mostly with sagebrush and no trees and dotted with the remains of buildings that once teemed with life. Bodie is a town, like many in this region, that sprang up in the 1850s with the discovery of a vein of gold that immediately brought settlers and life to this forlorn outpost and thrived for roughly 80 years until the gold ran out, and then, as if on cue, everyone left. Stores are still stocked with goods; houses still contain some furnishings; the pump organ is still in the church; a carriage is rusting in the livery stable. There are even two old gas pumps outside the general store with a 1929 Ford truck pulled up in front. At one time there were over 8,000 people living here. Now the lonely wind whistles through the cracks in the sagging walls barely standing. It is estimated that roughly 95% of the town has collapsed or burned down, but the 5% that remains is kept by the park service in a state of “arrested decay” for history’s sake.

It’s quite an experience to stare in a saloon and imagine gaiety, to look in a bedroom window and imagine love-making, to look in a church and imagine worship, to stare in the window of a school and imagine kids at the empty, dusty desks with a map of the world and a chemistry table still on the wall. And any minute, you are sure you will hear the sound of horses clip-clopping up the street or a Model T ticking by on the other side as this town springs back to life again.

It’s a sobering look at life especially in these days when COVID-19 threatens to shut down life as we know it. I think at times we all feel like we’re living in a ghost town, wondering when the signs of life will return. And they will, but so often we feel so empty.

What about you? What would someone see if they looked in your window? Would they see life? Are we coming alive in spite of our isolation? Are we looking for ways to connect — being creative?

Reach out in any way you can through phone, text, social media, and utilize our website and online church and Bible study. That’s what we’re here for. Don’t turn into a ghost town when there are so many ways you can connect.

This entry was posted in Facing death, pandemic and tagged isolation, pandemic. Bookmark the permalink.

2 Responses to Are we living in a ghost town?