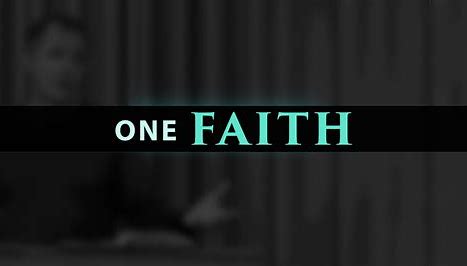 This is an easy one. One faith means just that: no denominations, no religions, no creeds. There’s only one faith because there is only one means by which one comes to faith in Christ and that is by way of the Holy Spirit.

Faith is a gift. It comes to us though no effort of our own. It is not made official by a decree or a board or a classification. There are not varying aspects of this faith. It’s not like there are lists of faiths, only one of which is true. There is faith in Christ, given by the Holy Spirit, and you either have it or you don’t. There are Catholics who have it; Baptists who have it; Greek Orthodox who have it; Jews who have it. It is a gift given by the Spirit. The ability to believe is not anyone’s own doing. And since it is a gift of the Holy Spirit, there is only one of them. Only one of these faiths, that is. That’s why it’s one faith.

This is how it is possible to encounter someone from the other side of the world, from a different culture who speaks a different language and yet know and recognize that you have the same faith. That’s because there is only one faith. You can be a Christian for five minutes or fifty years and the same thing will be true. You will both know immediately that you have the same faith. You do not have to check out whether you believe the same things or have the same doctrines because your faith is not determined by what you believe, but by who you believe, and by the faith that comes from the one Spirit living inside you.

This entry was posted in church, walk by faith and tagged church, faith. Bookmark the permalink.

2 Responses to One Faith