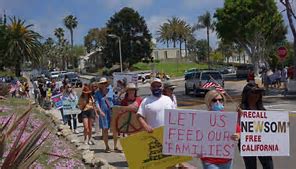 We’re hearing a lot about freedom now. People are getting tired of being shut up in their homes. It’s understandable. People need to go back to work. Breadwinners aren’t able to provide for their families. And then there are people who simply want to get out and enjoy the warmer weather in parks and at beaches and recreation areas that remain closed. Those in charge have to juggle the economy and people’s safety, and it’s not just about keeping people safe as much as it is keeping them safe from each other. But that’s hard to do when you’re treading on everyone’s civil liberties fighting an unseen enemy. This is a time which is going to require a lot of patience from all of us. We aren’t even close to being over this pandemic and people are already getting very restless.

One thing that is important right now, and perhaps you can share this with some of you friends and especially those who are seeking to follow Christ. There is an attitude that masks itself as freedom (no pun intended about the mask) that says freedom is the right to do anything I want with little or no regard for anyone else. But what happens when my freedom encroaches on someone else’s freedom? What do we do then? What if I want to be free to blare music at midnight and dance in my house with my windows open when my neighbors want to be free to get a good night’s sleep? How do we work that out? Well, we have to come together and figure out a solution (the best option), or call in the police, or file a lawsuit (the worst option).

What we often fail to remember is that with freedom comes responsibility. You don’t have to think any further than our founding fathers to realize this. Once they gained their freedom from England what did they do? Did they say, “Okay everyone for yourself; go do what you want to do; we’re free.” No, they spent weeks, months, years deliberating over how to use this freedom to create a government that would allow for the greatest amount of good for the greatest amount of people. What they came up with was the United States of America. It’s not perfect, but we’re still functioning with a system they created over 240 years ago. It’s bending, but it hasn’t broken yet. That’s what they did with their freedom.

Freedom with responsibility is a biblical guide, too. “For you were called to freedom, brethren; only do not turn your freedom into an opportunity for the flesh, but through love serve one another.” (Galatians 5:13)

Are we using our freedom to be selfish or to serve one another in love? Believe me, the latter is the only way we’re going to get through this.

If you missed church last night, you can still go.

Click here and scroll down until you see a video of me washing my hands.