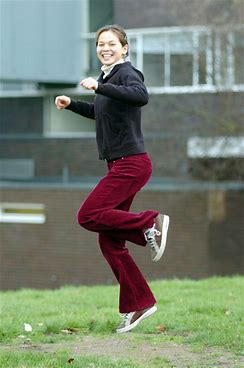 If you had been somehow able to view from outside the bathroom window, the conversation I once had with my wife, (why is it that all meaningful conversations in my house happen in the bathroom or the kitchen?) you would have wondered what that crazy woman was doing bouncing back and forth, hopping first on one foot, then the other, and at twelve midnight no less. What she was trying to do was have me grasp the significance of what she calls “Forgiveness now!” or if that doesn’t capture it, maybe “You can’t outrun your forgiveness” will help.

The cross to Marti, is not an abstract symbol to be pondered. We don’t take our folding chairs and our notebooks to the cross and wait for further instructions. We step into the life the cross made possible. We live the forgiveness the cross bought for each one of us. We enter the perpetual “now” where forgiveness is a current reality because our sin is ever before us, but here’s the thing: You can’t outrun your forgiveness. You can’t sin fast enough to beat your forgiveness.

At the trial of Jesus, Pilate found the prisoner innocent, but the people wanted Him crucified. Warned by his wife in a dream to have nothing to do with Jesus, Pilate decided to wash his hands of the whole thing and make the people responsible for His death, to which they cried, “Let his blood be on us and on our children” (Matthew 27:25). Little did they know that they were crying out for both the responsibility of His death and the means of their salvation at the same time. Christ’s blood on us and on our children makes us responsible for His death, but it is also that very blood that forgives us.

This entry was posted in forgiveness and tagged forgiveness, salvation. Bookmark the permalink.