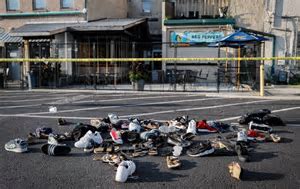 Have you noticed how easy it is to grow numb over shootings and mayhem and death? What’s going on right now defies rational thought. You open your newspaper and find articles about two mass shootings inside of 24 hours where two people have killed 29 and injured over 50 (we have a tendency to ignore the injured — at least they didn’t die — without realizing that for many, their lives, plans and dreams have been forever altered) and what do we do with this information? We file it in a growing file under “Incomprehensible” and go on to read about business or sports.

We are all pretty helpless against one isolated angry young man with an assault rifle and loads of ammo. Doesn’t it seem like the world is coming apart at the seams and no one can do anything about it? If you don’t have faith in a God who can make sense out of chaos, you have very little to hold onto. One thing’s for sure: the perpetrators of these horrendous acts are walled into their own isolation booths. No one with normal healthy relationships could do this. That means that at least we can be on the lookout for people like this on the edges of our circles of influence and attempt to reach out to them. Who knows what we might prevent? I always think of that person who jumped off the Golden Gate bridge and lived to tell about it, who said he told himself that if anyone — even a stranger — smiled at him that morning on his way to the bridge, he wouldn’t jump. Obviously, no one did. Look at what a simple smile could have done.

Love is the only thing that will conquer hate. Hope overcomes despair and compassion can bring someone out of loneliness and isolation. We can’t put a stop to these senseless acts, but we can persist in manifesting kindness, hope and compassion to all in spite of the chaos. And we can refuse to give up on the knowledge and firm belief that despite what we cannot comprehend, God is still in control.

This entry was posted in Meaning of life, Tragedy and tagged Dealing with tragedy. Bookmark the permalink.

8 Responses to What to do?