My son, Christopher took this picture recently with his cell phone on a walk with Jocelyn, our granddaughter. He texted it to us in a group text along with five other pictures and it could have easily gotten lost in there, but this one immediately jumped out at me. I was mesmerized. First, the way the picture is framed and balanced, the way the road starts and then continues further ahead, and the way Jocelyn is not the focus of the picture, gives it more the feeling of a work of art than just a snapshot he took on their walk. Whether this was intentional or accidental doesn’t matter; it looks to me like a framable piece of art.

Joci’s dress makes her look older than her three years, her hair blends in with the tall grass around her, and the fact that she is staring off into somewhere we don’t see makes you wonder what she is looking at and even more, what she is thinking. She sees something off the trail that interests her more than the road. 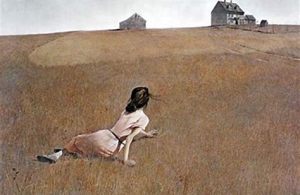 I immediately thought of the great American painter Andrew Wyeth and his painting, “Christina’s World,’ now an icon of the mid-twentieth century (it was painted in 1948). So much so that I had to look up Wyeth’s painting to compare it. The similarities are uncanny. Both are showing the back of a young girl in the foreground, left of center, staring off into the distance; both are set in the tall, dry grass of an open field; even the three dark green bushes in the upper right corner of Christopher’s photo parallels the house and barn in the upper right corner of Wyeth’s painting. And most of all, they both have a solemn, sort of unexplainable beauty — a lonely, wistful feeling.

In Wyeth’s painting, the model in the foreground is a composite of Christina Olson, who lived in the house in the picture, and the upper torso of Wyeth’s wife who was in her twenties at the time, making her much younger than Christina who was in her fifties. Christina had been stricken with a polio type disease that left her without the use of her legs, but eschewing a wheelchair, she preferred to crawl on the ground and pull herself along by her arms. Once you know this, there is something about the positioning of her body in this picture that indicates a paralysis. The painting appears in the 2016 British film War on Everyone in which someone comments upon seeing a reproduction of it, “It’s kinda creepy. It’s like something bad’s gonna happen but there’s nothing she can do about it.” How true.

Jocelyn’s world is not so depressing. It’s more pensive. We don’t know what she’s thinking, but it seems like something deeper than a three-year-old is capable of — like looking at the rest of her life maybe. And as she continues on down the road, we know there will be other times to step off the trail and see the world from another vantage point. She is a lucky girl. She has her whole life spread out in front of her. She has a loving family that supports her and gives her confidence. This picture is full of promise.

The line between life and art is sometimes hard to find. Sometimes life is art. If you start to look with an artist’s eye, there’s no end to what you can see. And if you think of the world as God’s masterpiece, you can see His handiwork everywhere. That’s when a flick of an iPhone can rival an American masterpiece. If we train ourselves to see His handiwork, then all of life can contain the worship of the Creator of all things.

This entry was posted in Art and Life, worship and tagged art, worship. Bookmark the permalink.