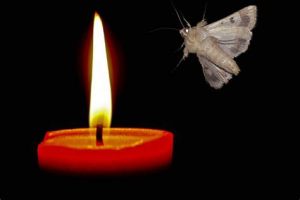 Okay, I want to know how many of you have ever tried to catch a moth with a Dustbuster. Come on … fess up. It’s a dangerous game. Truly. You might not think so, but when you’re standing on the edge of the bathtub so you can reach the ceiling corner over the tub and you have to work around a chandelier while your wife is yelling, “Over there; no, to the right; now he’s behind you!” And you’re twisting and turning, waving the Dustbuster everywhere trying to keep up with the moth and avoid the chandelier while keeping your balance with nothing to hold onto … it’s a dangerous game, and hardly worth suffering a broken leg or worse. So Marti spotted me as I continued to following the moth’s erratic path.

“Here, let me try,” said Marti after a few minutes of this, and I told her she wasn’t tall enough, but she had to try. It wasn’t long before she gave the job back to me. When I suggested we coexist with the thing, I received a vehement no. “Have you seen how dirty those things are? And it will eat my clothes.” I thought about telling her I didn’t think this was a dress-devouring moth, but after 45 years of marriage you learn what hills are not worth dying on. So the battle raged on. I tried knocking it out of the air with a dish towel, but that only succeeded in knocking a few things off the sink. Twice I got it to fly out the window only to watch it fly back in another one. I finally captured it by holding the Dustbuster up right next to a light bulb on the chandelier, and, like a moth to a flame, it eventually flew to the heat of the bulb right over the mouth of the ‘buster and got sucked inside. “Got it!” I shouted triumphantly, eliciting a high five from Marti.

Isn’t it typical, when we have a number of important big projects that are waiting to be to be done, how something small and insignificant like this can so easily capture all our attention? We have taxes to complete, we have an accountability group to be accountable to, we have Chandler’s career direction to help him set, yet here we are so wholly focused on chasing after a moth in the bathroom. It’s human nature.

But here’s the up side: Marti and I are working together for a change. We are so different and tackle things so differently. Often we are at odds because of it. And here, suddenly, we agree on something! We’re cheering each other on! We had a common goal and we did it! Now we can turn to much more significant goals like serving the Catch Ministry and you. Any victory, small or great, is still a victory.

One more thing, however. Once we had the moth in the Dustbuster, we had another problem. We’ve had this ‘buster for a while and the little tongue that holds stuff inside has come out so I can’t just hang it up in the closet in the pantry; the moth could easily crawl out and come back. So I went out behind the garage and let it out. Marti thought that was a bad idea, that it would just come back. I told her I doubted it was a homing moth, but then again, you never know. And if it does, this time we’ll be ready. We’re a team now.