Why grace is so hard to believe 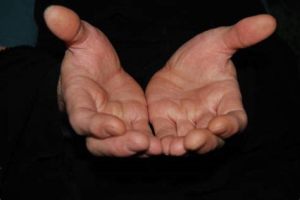 Let’s face it: grace is hard to believe. Why is that the case when it’s so easy to get? Well that’s actually one of the reasons right there. We are all taught that to get anything valuable, you have to work for it. It’s part of human nature. So for salvation to come as a free gift runs counter to our nature. We want to earn it because we want credit for it. Like the Pharisees before us and within us, we want control. Grace comes without controls, and that bothers the heck out of us. We’re not in charge of who gets it and who doesn’t; we are only in charge of receiving it and giving it out to everyone as freely as it was given to us.

That’s probably the biggest problem with grace: We have nothing to do with it.

Jesus told many stories about this, like the people who were brought in off the street to the fancy banquet because it was the host’s desire to invite them when the invited guests chose not to come. Or the landowner who paid a full day’s wage to all the workers in the field, even those who only worked the last hour, because it was his prerogative to do so.

It’s Jesus who says, “Fear not, little flock, for it is your Father’s good pleasure to give you the kingdom.” That’s it? He’s just going to hand us His kingdom because He wants to? That’s what it looks like.

You’ve heard of cheap grace. Oh it’s not cheap by any means. It’s quite expensive, it’s just not an expense we can pay. None of us is the Son of God. We could die on a cross if we could arrange it, but it would be pointless. It wouldn’t do any good for us and certainly not for anyone else. Only the death of the Son of God could buy salvation for the world. Only the resurrection of the same could seal it. That’s a huge expense, but we are way out of our league to think we can have anything to do with this.

That’s why grace makes no sense. It defies logic and reason. It runs counter to everything we’ve learned about cause and effect — about rewards and punishment. Robert Capon said it best when he said that “the gospel makes no more sense than the square root of minus one. … that God has up and done the damnedest thing (or to get the direction and adjectives right) He has down and done the blessedest thing that you or I could ever not have thought of.”

And one more thing about grace: It comes by way of failure, brokenness and sin. It’s a reduction principle. It reduces us to those who are poor in spirit. You must be undeserving of grace in order to receive it. You must know why you are undeserving, and that you can do nothing about it. Grace puts you in the lowest place — the lowest of the lowly. Indeed, we are looking up at everyone. I know this because it took me the longest time to get there even though I was there all along. It’s coming to see yourself as you really are.

But there must be something we can do, isn’t there? Yes. We can reach out and take it. A gift does have to be received. You can refuse a gift. This is why it is not God’s desire for any to perish, because He has paid the price for everyone, and for anyone not to receive it, that will break His heart.

Tomorrow: What’s so scary about grace?

This entry was posted in grace turned outward and tagged grace. Bookmark the permalink.

11 Responses to Why grace is so hard to believe