Posted on November 9, 2018 by jwfisch
Catch Ministry Television Advertisement – No Retreat
—————–
November 7, 2018
:60 TV/NO RETREAT
QUE UP MUSIC:
Soft choir music: “Just As I Am”
FIRST VIDEO:
Fade in on a grainy black and white Billy Graham video….
FIRST CAMERA:
John in close up. Takes a breath, looks left and right, leans into the camera. Choir still singing.
JOHN:
Our parents had Billy Graham and Tennessee Ernie Ford.
SECOND VIDEO:
Fade in Jesus People scenes, outdoor concerts, Christian talking heads
JOHN:
We had Jack Sparks … Frances Schaeffer … Chuck Smith …
THIRD VIDEO:
Change music, fade in on concerned looking young people in causal attire
JOHN:
Who do they have?
FOURTH VIDEO:
Vignettes of rap videos, guns, shoot out at a synagogue, pastors in jail for hate speech, journalists being beheaded, anti-Christian billboards – back up the camera to show all this being displayed on a smartphone. Back up some more, it is being held by a young woman on a subway.
QUE MUSIC:
New sounds of music, subway rolling on tracts,
JOHN:
Join us to give Christ a voice for this century. Give them what we had.
*****

“Our parents had Billy Graham.”

“We had Jack Sparks … Francis Schaeffer … Chuck Smith …” These three men vary greatly from each other, yet they are all similar as well, and it was those similarities that made them great.

Jack Sparks was a product of the student unrest of the 1960s and the drug culture in Berkeley, California. Berkeley was a feeding ground for radicals. But there was a new group of radicals that rallied around Jesus. Jack Sparks led that group which sought to contextualize the message of the gospel to radical and revolutionary university students. They formed the Christian World Liberation Front, spawned a street newsletter called Right On, and met regularly to study the Bible and spread the message of Jesus as the real and lasting source of peace, love and community.

Francis Schaeffer was the intellectual. He studied the popular philosophies of 19th 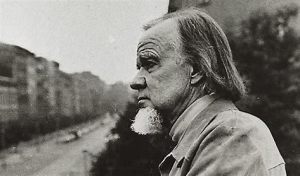 century thinkers, wept with the despair of artists and students who saw no way out of the entrapment of existentialism, and sought to show the relevance of the Bible to current thought. Schaeffer contextualized the gospel message to the art and philosophy of the day. The community he and his wife formed in L’Abri, Switzerland became a study center for thousands of young students from evangelical homes who were struggling with their faith in light of current thought.

Chuck Smith was the gentle father figure who contextualized Bible teaching and the reality of the Holy Spirit to a generation of students seeking a deep emotional connection with God. He didn’t mind their long hair, jeans, and their music. He opened his church to hippies seeking spiritual reality and they literally blew the roof off the place. They had to erect a huge tent because they couldn’t build a building fast enough to handle the demand.

I have stories about my own personal experience with each of these men, but the most profound was having Francis Schaeffer address my class at Wheaton College for a week at a time, both when I was a freshman and when I was a senior. He was the first Christian leader to connect for me biblical faith and contemporary thought and culture, and to teach me, by example, to cry over the lost. Perhaps you have a story from your experience with one of these men you’d like to share with us. Please do so by replying to this email.

Three men, three different ministries, one unifying factor: they all sought to make the message of the gospel relevant to the immediately felt needs of the younger generation. They got it. Whoever does this in any age will have an audience. Perhaps that is why many of the Millennials are coming here. They find our message to be relevant to their needs and their view of the world.

But there’s one more thing that all three of these men had, and that was passion. They had a passion for truth, and a love for the lost — especially the lost members of a young, searching generation. And each of them felt they had a corner on something that generation was looking for, and a way to communicate it, and because of that, a responsibility to follow it through. What drove them was the same thing that drove Billy Graham. They all had the never-changing message of the gospel, in an ever-changing form that was relevant to their day and the audience they were trying to reach.

We don’t fully know why we have the attention of Millennials. They found us; we didn’t seek them. But something about who we are and the way we do things here has connected. We are thrilled. Honored

The Catch, begun as the domain of Boomers, has become a gathering place now for Millennials as well, where rare cross-generational relationships are developing to talk about life and spiritual things with each other. Connecting with Millennials is the number one challenge the brick-and-mortar church talks about; creating cross-cultural and cross-generational community is the next one. Who would have known we would do both?

There is no way we could have anticipated the things that are actually happening among us. But this is who we have become. Cultivating intergenerational relationships is one of the most important ways in which The Catch Ministry is developing a flourishing faith in both young and old. This means changing the metaphor from simply passing the baton to the next generation to a more functional, biblical picture of the body — that is, the entire community of faith, across the entire lifespan, working together to fulfill God’s purposes.

Here at the Catch, we are ramping up the programs that we know will connect. We are studying and listening. We have a Millennial on our board. And as for us Boomers? We are not going to retreat, and “retire” is not in our vocabulary. (Retire sounds like tired twice. We got tired and then we got re-tired.)

Some segments of the population have already called a new Jesus Movement into being. If that’s the case, we are ready. Whatever we do, we will not retreat.

The Challenge
The Lord has called us to speak with new relevance as older, wiser pioneers looking into a new frontier – a frontier destined to be claimed by our very own Catch Millennials and their generation. Are you in?
Your Vote

[1] The following are only highlights of ministries in various stages of development that will be self-sustaining within the next 6 months.  I look forward to telling you more about each one, but briefly they include: “Johnny’s Café” – a place within the marketplace where we can interact with each other and participate in specifically designed classes, seminars, discussion forums, and roundtable dialogs with John and other thought leaders.  We have an enhanced MemberPartner program that includes a reserved table at Johnny’s Cafe for our “regulars,”our MemberPartners. We have been Beta testing our own radio station, Music that Matters Radio, that seeks to speak to the social and religious upheavals of the ’60s and ’70s and can bring the discussion forward for those in their twenties and thirties who are currently undergoing some of same societal stresses and asking many of the same questions. Over the next 12 months, Catch Publications will make available 4 new books by John.  Thanks to the generosity of Board Member Mike Boland, the rights to all of John’s books and recordings are purchased and being made ready for digital release. Newly formed Team Grace is our corps of volunteers. And finally, with a focus toward joining Millennials throughout the country, John and Marti are accepting speaking dates at Christian colleges and universities and honoring MemberPartner requests to speak in their locations.

This entry was posted in giving, Uncategorized and tagged giving, Jesus Movement. Bookmark the permalink.