Dig rock ’n’ roll or dig your own grave 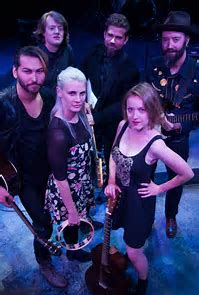 There’s one more insight to be gained from the concert Marti and I attended last weekend (see Monday’s Catch: “I Dig Rock ’n’ Roll Music”). I had mentioned how it was a tour through the music from 1962 – 1975 performed to an audience of boomers by a band of millennial musicians. It certainly confirmed what we have been saying here for some time about the connection between boomers and millennials that is happening across the board. But I failed to mention that the second half of the concert was made up of some of the group’s original music. That’s why the concert’s subtitle was, “A Celebration of Folk-Rock music Then and Now” — emphasis on the and Now. It was as if the band was saying, “Okay now, we’ve entertained you with your music (which we love — don’t get us wrong), but now it’s time for you to listen to ours.”

It was interesting to discover that their music was mostly in the style of the earlier music, but where it differed was in the deeply personal and transparent nature of the lyrics — the most revealing of them being a song a gay member of the group wrote about overcoming the difficulty of loving and being loved by those who are different.

On our way back to the car afterwards, Marti asked me what I thought of their new songs. I made the mistake of telling her I liked them, but I would have preferred to hear more of the old stuff. She jumped all over me, basically telling me that I might as well dig my grave in the back yard and that if we have two shovels, she’ll help me! She was right. We boomers have a choice to make, and we will probably need to make it daily, because things are moving so fast. We can shut down and say, “This far and no farther,” or we can stay open, keep learning, keep growing, and keep connecting with those who are younger, because our generations have much to learn from each other.

Even in their sharing of the older music, the younger musicians were careful to point out the fact that these songs were not just about the past; they were universal; songs for all time. In fact, many of them are especially needed right now, given the current mood of the country where no love is lost on so many sides. “Come on, people now, smile on your brother; everybody get together, try to love one another right now.” What’s old or dated about that? It was as if they were saying, “You guys captured in your music what we need to hear right now.” This was not a night of nostalgia; it was a night of “Pay attention!”

Next month we are thrilled to be launching our own music radio station on the internet. We’re calling it Music That Matters Radio Presented by John Fischer. We will lean heavily on original Jesus Music by artists such as Larry Norman, Barry McGuire, Randy Stonehill, Phil Keaggy, Paul Clark, Nancy Honeytree and Pam Mark Hall along with more current music by Switchfoot, U2 and many others. In addition, we will include “secular” music, as long as it matters. It was interesting to me to note that the concert included a number of songs already on my list as essential to have on our playlist, such as: “For What It’s Worth” (“Stop, children, what’s that sound?”), by Buffalo Springfield, “Woodstock,” by Joni Mitchell and “Four Dead in Ohio,” by Crosby, Stills, Nash & Young.

We are seeking to partner with those singers/songwriters, speakers, and influencers who can speak to the social and religious upheavals of the ‘60s and ‘70s and can bring the discussion forward for those in their twenties and thirties who are currently undergoing similar societal stresses and asking many of the same questions.

On our BlogTalkRadio interview last night with Darrell Passwater, a business professional who works with three groups of CEOs, he mentioned that two are older, but one is made up of millennial business leaders, and you could clearly hear his voice turn up a notch as he talked about his bright young leaders and how they are tackling the rapidly-moving issues like technology change and cryptocurrencies (like Bitcoin). He even spoke of the older CEOs and how some of them cover their ears when he tries to talk to them about these things. You can’t do that. If you do, let me know, because I’ve got an extra shovel I’ll loan you so you can start digging.

You can dig rock ’n’ roll or dig your own grave; there aren’t too many other options.