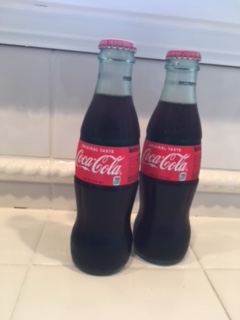 I am hopelessly branded. The brand has branded me. I pay $5.99 for a six-pack of coke and it’s not even 12-ounce cans or bottles; it’s for the little 8-ounce bottles, but they look like the coke bottles we used to drink from when I was a kid. We’d push down the big lever and they would roll out the bottom of the Coke machine. Or we’d lift the lid on a coke cooler, slide them along a rail and out the side where a lever would release one bottle when you drop your coin in the slot.

We used to take summer vacations in Texas on the ranch of a Coca Cola executive who had coke machines in his house that were always stocked and you never had to put in a dime. Boy were we spoiled. I can remember hot August days when it was so hot and muggy that it was all we could do to lie on the floor of the family room with fans going full blast, and do nothing but drink cold Cokes and nap. Pushing checkers on a board was too strenuous. Every time I pry the cap off of one of these bottles I feel that feeling, and nothing tastes better right then than that first sip. I could get Coke much cheaper — buy 12-ounce cans in a 12-pack for the same price or less — but I will pay extra to have this bottled experience over and over again. I told you I was hopeless.

Coca Cola was omnipresent during those summer days. There were signs on barns, signs along the road, huge bottle caps on buildings in town and in this guy’s house, all kinds of Coca Cola paraphernalia was everywhere.

And Coca Cola is inextricably tied to Johnny’s Cafe. Only you don’t get the bottles at Johnny’s, you get the glasses — the kind that are thin at the bottom, then open to a wide mouth with Coca Cola written on the side. And the Coke straw dispenser. And the Coca Cola clock.

There is fierce loyalty to a brand like this. I never did adjust to Coke from a fountain. It has to be mixed with the syrup and it never comes out quite right. It’s too thin, or it’s too syrupy. I want it out of the bottle, mixed properly at the factory. When I open a bottle, I know I’m getting what I’m expecting. I’m getting a Coke.

In 1985, Coca Cola attempted to change its formula with a New Coke. Big mistake. Even though in blind taste tests people preferred the New Coke to Coke and Pepsi, there was a backlash of nostalgia. The company broke its promise. You popped the cap off, took a sip, and didn’t get the feeling. So they went back to the old formula and called it “Classic” until 2011, when they finally dropped “Classic” and now we’re just Coke again. Why would you change something after a hundred years of success?

A human soft drink company delivering on its promises to give us the same drink it gave us 60 years ago, is one thing. The God of the universe delivering on His present and eternal promises is the surest thing ever. He can be trusted. He is God. His word is true. What a comfort to know we are branded with this brand forever.

Leave a Reply to John A Fagliano Cancel reply