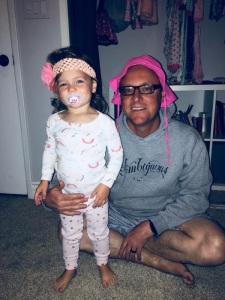 So you have not received a spirit that makes you fearful slaves. Instead, you received God’s Spirit when he adopted you as his own children. Now we call him, “Abba, Father.” Romans 8:15

My dad was a good dad. He made sure I was in an environment to learn about God and His word. He provided for me — even made sure I went to college without any debt. He left this world without placing a burden on his children for either him or his wife. He prayed. He took us on awesome family vacations. He played ping pong with us, and once in a while, took me to a baseball game. He laughed a lot.

My dad was a bad dad. He did not praise or honor his wife. He made fun of her a lot. He knew Proverbs 31 and agreed with it, I’m sure, even probably thought he was acting on it, but he was not. He might have thought his thoughts were pure, but his actions spoke louder that his thoughts. When his wife died he claimed to have lost his companion. That’s too bad. I know another couple who were so one with each other that when one of them died, the other died too. My dad only lost a companion. My dad was, for the most part, silent. He was locked up inside himself. I can only assume he wanted it that way. He didn’t want to engage. And in the last few years of his lonely life, he succumbed completely to what the movie “Never Ending Story” calls “the Nothing.”

But he was my dad; so he was the best dad for me. I must make peace with this, because I see many of the same things at work in me, and if I let resentment and hatred rule, I will most certainly become what I hate. It’s human nature. I can see it working. I have spent hours with my own sons in silence, unwilling to climb out of myself and engage. I have to fight the Nothing. Far too much of my personhood has already been eroded away by it.

In spite of all this, my dad is my dad, and he was the best dad for me, so I forgive him and love him. I must do this or I, too, will be swallowed up by the Nothing.

The best news in all of this is that we have a heavenly Father who is making everything right — even our wrongs. He is redeeming our lives and our histories. And He has given us His Spirit which cries out “Abba Dad” inside us. We know our Father and we are covered by His grace. When my kids tell me I’m a good dad, I can only think of grace. That is a pure statement of grace because I know that I am not. Our “Abba Dad” is already starting to make things right.

So that is why my conclusion for Father’s Day is: Good dad. Bad dad. My dad. “Abba Dad.”

This entry was posted in Uncategorized and tagged Father's Day. Bookmark the permalink.