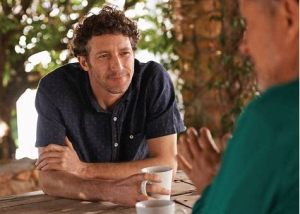 I’m not one who’s got it all in place

Telling you what you should do, no;

Showing you where I found food.

When I wrote this song, I don’t remember being aware of how I used the words “telling” and “showing,” but I can say now that it has huge significance. “Telling” you what you should do, versus “showing” you where I found food for both of us is a big difference in posture. In my experience of Christianity, there is simply too much telling, and not enough showing.

Telling focuses on doctrine — on getting it right. It focuses on the message, which is all well and good, unless it means you don’t focus on the person or how the message relates to you. We used to even practice a sort of hit-and-run telling with non-Christians, where you deliver the message and then get out of there as soon as possible. It was a witnessing raid. We weren’t supposed to be in their circle of influence anyway lest we get led astray.

We like telling because we can keep a distance from sinners and from our own sin. Telling means anybody can do it as long as you memorize the message. You can tell with a book or a tract. You can let someone else tell, or let a tool do the telling and follow up later. Telling allows you to keep your distance.

I walked out of an Angels baseball game the other night and walked by two guys holding up lighted signs about repenting of your sins and getting saved. I watched them for a while and noticed that no one came up to either of them and said anything. They were all alone in a crowd. Their signs were telling people what to do. But it’s more meaningful to put your sign down and walk with me a while. Show me something about what it means to believe. What are some of your sins you got saved from?

Showing may put you too uncomfortably close to the sinner.

Showing may put you too uncomfortably close to your own sin.

If you ask my friend Arnold how he came to be a believer today after a lifetime of being an atheist, he will say it was from getting to know me. It wasn’t any particular message I told him and requested a response, it was from basically sharing my life with him, or better yet, sharing our lives together.

To be sure there is some telling involved in our relationship, especially now that he is a believer and is hungry to know more, but even then, it’s how you tell that’s important. When I tell, I basically say, “This is pretty much what it seems to be saying to me. What do you think?” And I find out that he has some deep spiritual insight already. He may have had it all along. The point is, I’m not telling him, we’re showing each other.

Telling is delivering something to someone, and the typical positioning of telling is that the teller is above the person being told. With telling we are handing down truth. With showing, we both come to the truth together and share how it relates to us. What does this mean to me? What does it mean to you? How does it relate to our lives?

Show and tell is great; we just need more show and less tell.

This entry was posted in 12 Steps and tagged 12-step Christians. Bookmark the permalink.

5 Responses to Show and tell