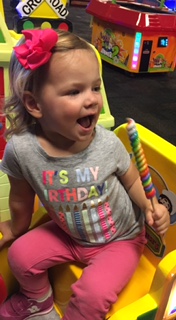 We interrupt our study in Acts to spend a moment with Miss Jocelyn Anne Fischer who turned two yesterday, and whose birth was acknowledged and duly celebrated with a small family gathering in Brea, California at the home of Mr. Chuck E. Cheese. At two, we’re not sure how much of the events around her she is able to grasp, but that doesn’t matter, because Joci is one to take what she can make of pretty much any situation. To watch her is to watch someone walking matter-of-factly through a world of their own making. If she wants to acknowledge you, she will; if she doesn’t, she won’t. You have to not take it personally. It’s not a snub. She’s just has an agenda she isn’t telling anyone about. 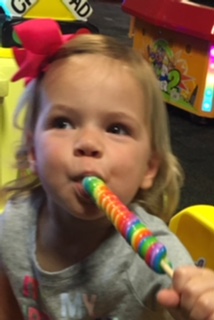 A good time was had by all, including Chandler and his girlfriend, Morgan. The colorful lolly pop in these pictures was won valiantly by the strong efforts of Chandler and Morgan at various games in the arcade.

Being our first grandchild, it’s only right to acknowledge new feelings I haven’t had before — feelings of being somehow connected to something wonderful I had nothing to do with. It’s God’s miracle of life that never gets old, because each person born is a totally new creation mirroring something not yet seen or known of the image of God. It is no small thing to be such an important part of His universe, yet such a humble part as well, when we understand the vastness and breadth of His greatness and His wisdom.

When so much of normal decency and human respect seems to be unraveling in front of our eyes, it helps to recall how precious and important we all are and especially our children.

This entry was posted in Transformation Generation and tagged birthday. Bookmark the permalink.