What’s under your June Christmas tree? 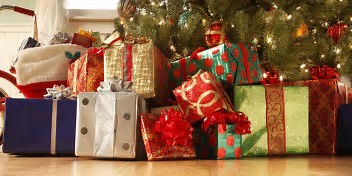 Christmas in June actually stands a chance of meaning what Christmas is really all about. Not that I think all of Christmas is hype or phony, but I think just about everyone would agree that Christmas is more than chestnuts roasting on an open fire or Jack Frost nipping at your nose. And in June you might stand the chance of finding out what that is because the things that can distract you just aren’t there like all the shopping and the lights and the music and the ice skating and the expectations and the traditions and the snow (real or fake). What you’re left with is the fact that God is here. Emmanuel. That’s truly Christmas. Christ came, accomplished His Father’s perfect will, saved us, and enlisted us in His service for what He wants to do in the world. Merry Christmas.

So now Merry Christmas means anything that was made possible because God came into the world.

Twenty-five people chip in to buy a wheelchair for someone who has prayed for them and led others in praying? Merry Christmas.

A relationship that’s been strained is whole again? Merry Christmas.

Someone was born again? Merry Christmas.

Someone was baptized? Merry Christmas.

You were given courage to do the right thing? Merry Christmas.

You received a gift and used it and someone was blessed? Merry Christmas.

A homeless couple now has a roof over their heads? Merry Christmas.

Look at all the Christmas gifts in June! Take your imaginary tree and imagine the gifts you have around it — things that have become possible because God came into the world. Write us and tell us about them.

This entry was posted in Uncategorized and tagged Christmas in June. Bookmark the permalink.

2 Responses to What’s under your June Christmas tree?