You don’t need the Garden Tour, but it wouldn’t hurt 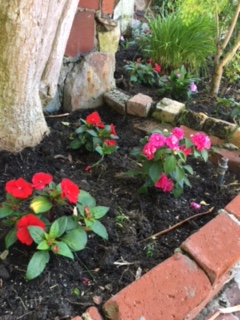 On the Fischer Garden Tour

We’re having some pretty strange weather right now for Southern California. When I got up early this morning, the house was 58˚. Marti likes to sleep with the heat off and the windows open, but it’s 52˚ outside right now which is pretty cold for us here in May. I’ve got the heat cranking now to warm up the house, but I’m wearing my black hooded sweatshirt with the hood up. The top of my head and back of my neck are cold, so the hood helps. But if someone sees me through a window walking around the house right now with my hoodie up, they might think we were being robbed.

It also rained this weekend. That’s unusual, too, for May. When Albert Hammond sings “it never rains in Southern California,” he means from May to September. Our new flowers will be so happy. We just planted a few flats of impatiens. The red ones are especially beautiful. They’re a deep velvety crimson.

Which reminds me; last Friday, the Garden Tour came by my house. At first I couldn’t figure out what was going on. It sounded like someone was having a party two doors up at ten in the morning. That’s when I went out front and noticed large clumps of people making their way down the street with program books in their hands. They were following a walking tour map with certain houses designated as part of the tour. That’s when I remembered seeing something in the local paper about this. I’m not sure how this works, but I guess you nominate your house for the tour and someone comes by and checks out your garden to see if it’s worthy of being on the tour. I imagine it’s a great incentive to get your garden looking tip-top.

I wonder what would have happened if I had stood at the top of our driveway and invited people to come check out our garden? I bet they would have come. People are naturally curious; they want to see other people’s stuff. Let’s be honest: How many open houses have you gone through just because it was an opportunity to see inside someone else’s house? And when the realtor asks you what you are looking for, you make up a story about needing bigger or smaller space and take his card, and when he asks for your number, you say, “That’s okay; we’ll call you.”

I probably would have gotten in trouble with the Garden Tour people, but I bet I would have gotten a lot of people to come look at our new impatiens. It would have been disappointing from the garden standpoint because they were just planted last week, but no one would have been disappointed about seeing what you can’t see from the street about our house and yard. And think about the people we would have met from our community. Makes me think that next year, we should get an early start on our garden and see if we can get on the tour.

Ever thought about letting people take a tour of your life? Doesn’t matter if they’re strangers, or acquaintances, or good friends, our lives — good, bad and ugly — need to be open to anyone. There’s a reason for this. A tour of your life or mine should reveal Jesus at some point. And not just stuff about Jesus, but Jesus — the real Jesus — Himself. Peter said, “In your heart set apart Christ as Lord” (1 Peter 3:15). Anyone gets that far in the tour, they’re going to discover who’s in your heart.

And we don’t need to get on the Garden Tour list (although it’s not a bad idea for making new friends). Just stand atop your driveway and invite people to see your new impatiens, or whatever else you just brought into your life.

This entry was posted in Uncategorized and tagged community, neighborhood Christian, witnessing. Bookmark the permalink.