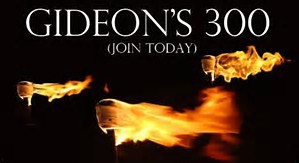 And what more shall I say? I do not have time to tell about Gideon, Barak, Samson and Jephthah, about David and Samuel and the prophets, who through faith conquered kingdoms, administered justice, and gained what was promised; who shut the mouths of lions, quenched the fury of the flames, and escaped the edge of the sword; whose weakness was turned to strength; and who became powerful in battle and routed foreign armies. (Hebrews 11: 32-34)

Hebrews, chapter 11, is God’s Hall of Fame. It’s full of men and women who did awesome things with their lives, and there was one key element that got them in this prestigious list — one thing that they all shared in common — one means by which the mighty things they did were accomplished, made common by one simple phrase that is repeated over and over again in this brief account of their heroic deeds; it is the phrase: “by faith.” In fact, it would be more appropriate to call it God’s Hall of Faith rather than the Hall of Fame. Not to say these people didn’t become famous, but the things they did that made them famous were done by God; they were simply the means by which God accomplished His will in the world through them. While God did it through them, they did it by faith. Faith was their part of the equation.

And here’s where it gets exciting. Faith is our part of the equation, too. It’s the means by which we tap into the power of God. Not only that, but we find by becoming familiar with the stories surrounding these people in the Old Testament, that they were weak, fallible, imperfect human beings just like us, and even the faith to believe came from God. In fact, that’s precisely why this chapter is in the Bible — to encourage us that if God could do these amazing things through these flawed people in the Bible, imagine what He can do through us today, even now.

We are soon to release a book containing our study into the life of Gideon, one of these people of faith. You will find Gideon to be weak, afraid, intimidated by the enemy and in need of multiple reassurances that God will be with him as he goes into a battle against impossible odds — not too much different than any one of us would have been in the same circumstances, and not much different than who we are now, and how we approach doing the things that God wants us to do. When you realize that even the faith to believe comes from God, you realize that your job is mostly to show up. Show up for that thing you are called to do that you don’t want to do, or don’t feel adequate to do, and trust God to show up too, in you. That’s the way they did it, and the way we’ll do it too. Who knows? Maybe we’ll make it into God’s Hall of Faith in heaven.

There’s no reason why our weakness can’t be turned into strength just as Gideon’s was. Follow the story and find out how it’s done.

This entry was posted in Uncategorized and tagged faith, Gideon. Bookmark the permalink.