Bringing heaven and earth together 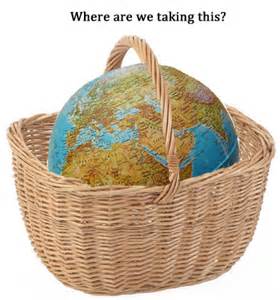 If the foundations are destroyed,
What can the righteous do?
The Lord is in His holy temple,
The Lord’s throne is in heaven. Psalm 11:3,4

“Old timers have always thought that the world is going to hell in a hand basket,” writes our good friend David Roper, “but, by golly, we may have actually arrived. Here we are, beset by a whole new set of corrupting influences, bad manners and indecent behavior, political craziness and a lack of responsible, rational, moral leadership. The foundations are crumbling! What’s a body to do?”

I woke up this morning to messages back and forth among people in an Internet group, none of whom I recognized. Don’t even know how I got in the loop, but the discussion has deteriorated to name-calling and insulting language all based on the election. One person just wrote “Good riddance,” and left. I don’t blame him. I can’t imagine how this kind of damaging rhetoric is being helpful to anyone.

Then David Roper comes along with his “hell in a hand basket” comment and I sort of half chuckle, half cry. It’s funny, and yet it’s not, because what’s happening is serious. I would imagine this type of “discussion” is rampant all over the Internet. (I put “discussion” in quotes because it is hardly that. A discussion alludes to a fair exchange of ideas; this is neither fair nor an exchange, it’s just a showdown of words over who can sling the most damaging insults.)

The verses from Psalm 11 that David used for his reflections are so fitting because they give us a realistic reaction to the disintegration of a respectful society. If the foundations are being destroyed, what can we do? The Psalmist answers that by reminding us that the Lord is where He always has been, and always will be. He is in His holy temple and He is firmly planted on His throne. Things may be shaken-up here, but there, nothing is shaken. Everything remains as it should be, and God is in control. This remains true for whatever happens here on earth.

“But so what?” you might say. “So God is in His holy temple — that’s great for Him — we’re still just as messed up down here. Heaven’s too far away.” Or is it? What if heaven wasn’t far off at all, but right next to us, only in a different dimension? Jesus announced that the kingdom of heaven had come. He brought it. And we pray every day that God’s will might be done “on earth as it is in heaven,” thus connecting earth and heaven. So this means the Lord on His throne, in His holy temple …and that’s going on right here, not off somewhere else.

So what can the righteous (or the “just”) do when the foundations of society are being destroyed? They can live and move in the kingdom of God on earth where God is in control and bring that kingdom, through the presence of God, into their everyday lives. These are not two distant realms that have little to do with each other; they are side by side — literally: one inside the other — where what happens in one, happens in the other. So whatever happens in the world, we continue on dwelling in heaven on earth, bringing the things of God to light whenever we can. That would mean we play no part in the divisive rhetoric going around, and instead, we hear people out. We respect and embrace those who are different because in God’s kingdom we are all equal. We operate where God rules, which would be everywhere, acting out God’s will as we have come to know it through the scriptures and through knowing Him.

We are followers of Christ. We act as Christ in the world. And if He brought the kingdom of heaven to earth, so do we.

This entry was posted in Uncategorized and tagged election, heaven. Bookmark the permalink.

4 Responses to Bringing heaven and earth together

Leave a Reply to TimC in Oregon Cancel reply