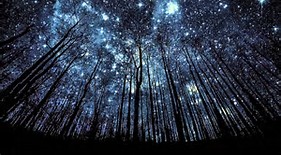 I always love it when science proves the truth to be true, in this case, science proves that we were made to worship, and that worship improves our outlook on life, and even our health. That’s what an article in Parade Magazine this last weekend said and what I wrote about in the Catch yesterday. Of course the magazine article didn’t talk about worship — it talked about “awe” — but it was, in fact, all about worship.

Worship is what we are all meant to do as human beings. Notice I didn’t say what we were all meant to do as Christians, I said as human beings. Yes, worship is human. We were created with not only the capacity to worship, but with the need to. To quote Arizona State University psychologist Michelle Shiota, “Awe is now thought to be a basic part of being human that we all need.”

So what brings awe, or worship into our lives? Anything overwhelming in nature. For instance, try the massive power of nature, like a hundred foot wave, or the hurricane that “attacked” Florida recently. Or how about simply the night sky, away from the city lights on a crystal clear night? Have you ever seen so many stars that there’s hardly any black area in the sky at all? Or even what man has created like the Seven Wonders of the World? Of course God has enabled us to do these incredible things. Or how about going from the greatest to the smallest, like the tiniest building blocks of the universe in quantum physics, or the yet undiscovered invisible yet-to-be-named particles that hold everything together? Awesome.

Awe is why I love backpacking. You come up to the crest of an 11,000 foot mountain peak and as you look out over the tops of lesser mountains and mountain ranges as far as you can see, you are filled with something deep inside you that nothing else can mimic. And it happens every time.

If we could just stop and recognize that all of this — every last bit of it, is pure, unadulterated God, we would no longer feel separated from Him, or wondering where He is or if He exists. We are already worshiping Him in that which brings us awe in the world. Everyone is already worshiping God whether they believe He exists or not.

“When I consider your heavens, the work of your fingers, the moon and the stars, which you have set in place, what is mankind that you are mindful of them, human beings that you care for them?” (Psalm 8:3-4)

“The God who made the world and everything in it is the Lord of heaven and earth and does not live in temples built by human hands. And He is not served by human hands, as if He needed anything. Rather, He Himself gives everyone life and breath and everything else. From one man He made all the nations, that they should inhabit the whole earth; and He marked out their appointed times in history and the boundaries of their lands. God did this so that they would seek Him and perhaps reach out for Him and find Him, though he is not far from any one of us. ‘For in Him we live and move and have our being.’ As some of your own poets have said, ‘We are His offspring.’” (Acts 17:24-28)

“In Him we live and move and have our being.” That’s as true for the atheist as it is for the believer.

This entry was posted in Uncategorized and tagged apologetic, worship. Bookmark the permalink.

5 Responses to Worship is human