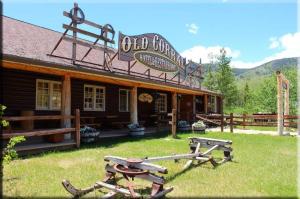 There is a steakhouse in Centennial, Wyoming, that has been in operation since 1872. We found it when we were sightseeing with our son Chandler in the mountains near where he currently resides. It was a couple of weeks ago in October and we were driving up to see some of the early snowfall of the season. Centennial is a tiny town (population 270) set in the foothills just before you head into the higher elevations. In the winter months, the road beyond there gets so much snow they close it down. The snow plows stop at Centennial.

We were on our way back down the mountain in the late afternoon when we decided to stop at the restaurant for dinner. We had about a half an hour to kill before the kitchen opened, so we sat outside and ended up talking to a couple of locals. The October chill was starting to set in, but the late afternoon sun was buttery warm. From where we sat you could see the expanse where the foothills opened to the plains and miles and miles of that broad Wyoming sky.

One of the people we were talking to turned out to be the new part-owner of the place and he was wrestling with a big roll of rusty barbed wire he and a busboy were trying to unwind and take inside to use for decor. There’s a loft in the bar and apparently when things get crowded on the weekends with live music and dancing, some of their more inebriated guests have taken to climbing up there, so they were strategically placing the barbed wire to enhance the western motif, but mostly to keep people out of the loft.

“Wow, that must hurt,” the man said, looking at a fresh cut on his left hand.

“You can’t feel that?” Marti said as she saw the blood.

“Nope,” he replied. “Got too close to a bomb blast in Iraq. I haven’t felt anything in that hand for a long time.”

“I’m so sorry,” Marti said, but the man just shrugged it off and continued wrestling the testy barbed wire into the building.

Marti makes a point of always thanking veterans and service men and women when we are out and about, so I wasn’t surprised that later in the evening when he visited our table, Marti genuinely thanked the man for his service to the country, and to her. She always takes it personally — that they are/were servicing her and her freedom. Surprised by the genuineness of Marti’s thanks, the man was outwardly embarrassed, but you could tell, inwardly pleased to be receiving attention he wasn’t expecting, but so deserved.

It must be hard for veterans like him to carry on normal life here, when a large chunk of their lives were spent worlds away in a conflict that defies reason in our world. It must seem almost surreal to have those gut-wrenching experiences in your memory bank. I have a classmate who watched his whole squad die in one firefight in Vietnam — his radio man expired in his arms. Sorry, but you don’t ever get over that. Thank you, Tim.

It was only a few moments later when Chandler and I heard a loud crash as Marti returned to our table from a visit to the restroom, white as a sheet. A heavy rack of elk antlers had slipped out of the man’s grasp as he was rearranging things in the loft and missed Marti by inches. That could have been disastrous. Must have tried to grab it with the wrong hand.

Thank a veteran today; you never know what might fall on you tomorrow.

This entry was posted in Uncategorized and tagged Veteran's Day, veterans. Bookmark the permalink.