The day I swapped my dad for two goldfish 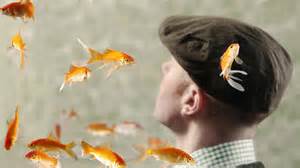 We’ve been looking into the subtle and not so subtle messages of children’s books this week. Today I’ve selected one of my favorites, The Day I Swapped My Dad for Two Goldfish, by Neil Gaiman, illustrated by Dave McKean. It’s a clever little story about a boy who really liked the two new goldfish his friend Nathan brought over to show him. He liked them so much, he offered pretty much any of his toys for a trade. Nathan turned down everything.

So the boy sat down to think. “Some people have great ideas maybe once or twice in their life, and then they discover electricity or fire or outer space or something. I mean, the kind of brilliant ideas that change the whole world. Some people never have them at all. I get them two or three times a week.”

“I’ll swap you my dad,” the boy said, coming out of his thoughts. At first Nathan didn’t like the idea, until the boy pointed out that his dad was as big as a hundred goldfish, and he could swim, and splash around in the swimming pool. So Nathan agreed and took the boy’s dad with him.

Now this sounds a little preposterous until you see that every time his dad is pictured in this story, he has his face buried in the newspaper. “My dad doesn’t pay much attention to anything, when he’s reading his newspaper.” (My sentiments exactly!)

Of course, when his mother came home and couldn’t find her husband anywhere, she had to untie the boy’s little sister and take the sock out of her mouth to find out.

“You can take these goldfish over to Nathan this minute, and don’t you come back without your father.”

“I told you so,” said the boy’s little sister.

“And you can go with him,” said their mother. “Fancy allowing your brother to swap your father for two gold fish and a bowl. The very idea.”

So, off they went to get their father back, when they found out that Nathan had already swapped their father for Vashti’s electric guitar. “Well he wasn’t very exciting,” said Nathan. “All he did was read the paper.”

So they left the goldfish with Nathan and set off to Vashti’s house to swap back his electric guitar. Only to find that Vasti had swapped their dad for Blinky’s gorilla mask, and Blinky had swapped their dad for Galveston, Patti’s white rabbit with one black ear. So, after swapping back everything and taking Galveston back to Patti’s house, they finally found their father sitting in Galveston’s pen, reading the newspaper and chewing on a carrot.

Everyone was much happier getting back what they swapped.

We’ve all at one time or another wanted to ship our parents off somewhere — heck, how many times would we have traded our kids for just about anything? But in the end they’re our parents, and they’re our kids, and we really do want them back, because they’re the only family we have; they belong to us, and we belong to them. God gave us to each other, no matter how difficult we are, and that’s just the way it is.

And think about this: God swapped His only begotten son for you. He made a good deal, too, because, in the end, He got His son back, and He also got to keep us.

This entry was posted in Uncategorized and tagged children's books, family. Bookmark the permalink.