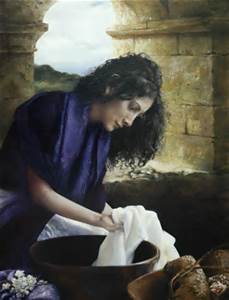 On the Sabbath we went outside the city gate to the river, where we expected to find a place of prayer. We sat down and began to speak to the women who had gathered there. One of those listening was a woman from the city of Thyatira named Lydia, a dealer in purple cloth. She was a worshiper of God. The Lord opened her heart to respond to Paul’s message. When she and the members of her household were baptized, she invited us to her home. “If you consider me a believer in the Lord,” she said, “come and stay at my house.” And she persuaded us. (Acts 16:13-15)

Lydia was a businesswoman. She was a merchant from the Turkish city of Thyatira who dealt in the trade of dying and selling fine purple cloth. She was successful at her trade to the extent that she owned a spacious home and had servants to care for her and help run her business.

Purple cloth was highly sought after, especially from this region, because there was something about the waters of Thyatira that took particularly well to the purple dye that was used at the time in producing a deep, lasting color not able to be found anywhere else in the known world. Lydia’s mental acumen, strong business sense and advantageous timing — not to mention her marketing ability — had helped her capitalize on this unique opportunity, making her successful and influential in the community.

Though probably not a Jew herself, she was a seeker after God who had found something resonating within her in regards to the God of the Jews. We know this because the place where Paul met her was a place where local Jews came to pray on the Sabbath. This was unusual in that most non-Jews would have been either secular philosophers, or worshipers of the local Grecian deities.

The Bible says that God opened her heart, which is what happens when anyone comes to the Lord. The Lord opens our hearts and we receive Him, or, as Saint John Chrysostom (347-407), Archbishop of Constantinople, put it, “To open is the part of God, and to pay attention that of the woman.” True seekers of God make even truer finders.

God opened Lydia’s heart, Lydia paid attention, and God had a new servant and a place for the new church in that city to identify and grow.

Isn’t it  interesting that the Bible — even more specifically, the New Testament — has no problem seeing women as businesspeople, homeowners, merchants, philanthropists, and people who are politically and socially connected, when today, in Christian circles, such things are considered a departure for the norm, which still seems to glorify only the housewife? “A woman’s place is in the home.” Isn’t that in the Bible somewhere? No, at least, not in mine.

This is not to say that this should be the road for all women to take, but it is to say, at least, that the door to influential service in the marketplace is certainly open to all who choose to knock on it, regardless of gender.

After Paul and Silas came out of the prison, they went to Lydia’s house, where they met with the brothers and sisters and encouraged them. (Acts 16:40)

This entry was posted in Uncategorized and tagged Marketplace Christian, women of the Bible. Bookmark the permalink.

1 Response to Famous seller of purple converts to Christianity